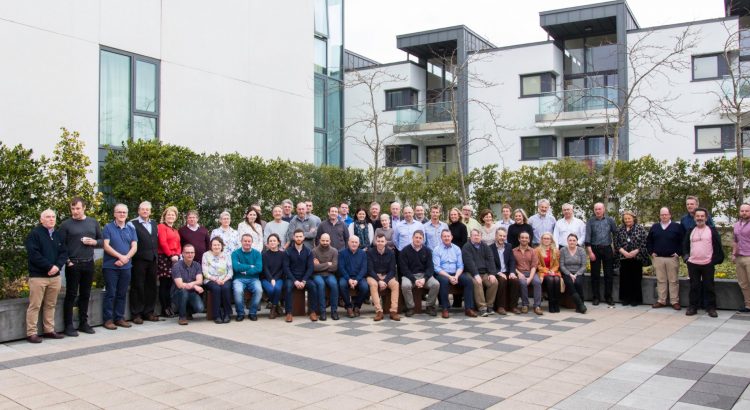 On the 15th of March 2018, the third stakeholder meeting of the MOREFISH project took place in the Sheraton Hotel in Athlone. The event proved to be the largest of the meetings to date with 62 attendees, consisting of representatives from industry (14 farms represented – approx 90% of freshwater farms), research, academia and regulatory bodies. The theme of the day was “Model Trout Farm concept – Applicability for Irish Freshwater Aquaculture?”. The model trout farm concept originated in Denmark in the early 2000’s and is based on the principle of expanding the sector while limiting impact on the environment through this expansion. This concept relies upon sites using greater volumes of recirculated waters, advanced water treatment and the implementation of new technologies.

MOREFISHs own Alan Kennedy opened the day (Figure 1), thanking all the delegates for their attendance and asked for a moment’s silence for the recent passing of Dr Richard FitzGerald. The agenda for the day was presented and the first speaker of the Peder Nielsen was introduced. Peder is a private aquaculture consultant and one of the two architects behind the Danish model trout farm concept and is involved with recirculated aquaculture systems (RAS) projects globally. His approach and expertise are focused on pragmatic and economical, sustainable RAS solutions.

Peder’s talk outlined the shift in policy, perception and legislation which brought about the transition from traditional flow-through farms to the model farm project (Figire 2). He outlined the benefits to operators by switching to a model trout farm with improved FCR, reduction in risk of escapes, reduced insurance premiums and lower consumption of natural resources. The talk was well-received, and a lengthy Q&A session followed, where several insights into the Danish aquaculture sector and the model trout farm were shared.

The second talk of the day was by Søren Jøker, owner and manager of a model trout farm in Denmark which produces 200+ tonnes of fish per year. Søren has owned his farm since 1991 and using the traditional flow-through configuration he was able to produce on average 60 tonnes of fish per year. In the 2000s he changed the configuration of his farm to a model 1 farm (semi-recirculated). Following this change, his production capacity increased to 200+ tonnes of fish per year. While the transition has been successful for him, he also outlined the limitations of his farm and provided advice for those interested in changing their farm layout. A lively Q&A session also followed Søren’s talk, some of the questions asked included what he would do differently if building again, the response of which was to build the site with higher capacity.

Given the positive response and the interest by all the attendees to the presentations given by Peder and Søren, it is obvious there is an appetite and an interest in the adoption of such a concept by the trout farmers of Ireland (Figure 3). The model trout farm concept offers operators an incentive to build and invest in their business provided they meet their discharge limit.

This workshop was made possible through the support of Ireland’s Seafood Development Agency – Bord Iascaigh Mhara.

The next MOREFISH stakeholder meeting is being planned for early to mid-2020. If you would like to attend this event, please contact Alan Kennedy on michaelalan.kennedy@nuigalway.ie